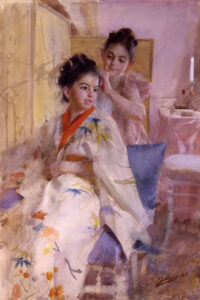 In 1888, Anders and Emma Zorn settled in Paris. It was a year before the great Exposition Universelle was going to take place, for which Zorn wanted to prepare on site. In Paris, several portrait commissions from members of some wealthy families also awaited him, commissions that could be important for his future career. In this watercolor, we see two French sisters, Jeanne and Antoinette Salomon, busy at home getting dressed. It is one of Zorn’s largest watercolors and was influenced by Japanese art. Emma Zorn acquired the picture in conjunction with the commemorative Zorn exhibition in 1924. Jeanne, the sister who is standing, was at that time a war widow in France; decades later she was murdered by the Nazis.