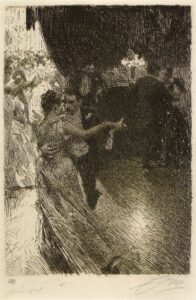 This etching was made after an oil painting that Zorn painted in Paris and which was bought by an American art collector. Zorn writes about the painting in his autobiographical notes: “I, myself, liked to dance and I wanted to catch the movement from the society balls I witnessed in Paris. There was such a mess of people that you could rarely take any steps in the ballroom without being pushed out of step. To dance more peacefully, you had to move into an antechamber; it was that kind of intimate scene I wanted to depict.” In the background, Emma Zorn is carried by the artist, Louis Sparre and in the foreground Zorn himself dances with Märta Petrini, a Swedish opera singer.