The exhibition Bernd Janusch – 50 Years of Silver relates to Anders Zorn’s passion for silver and to his interest in arts and crafts in general. That the exhibiting artist is from Mora, would surely be extra appreciated by Zorn.

Born in Austria in 1943 and educated as an architect, Bernd Janusch arrived in Sweden at 22 years old. Silversmithing was introduced to him in the late 1960s by his former wife Rosa Taikon. Inspired by Romani silverwork, he left his career as an architect for full-time silverwork and jewelry making.

Bernd Janusch’s organic jewelry is, according to the artist himself, a tribute to life. The sensual and sometimes daring design was praised early by critics and audiences and resulted in a series of exhibitions at galleries and museums. In 1995, the designe magazine Form called him “The Master of Sensualism”. Today, Bernd Janusch is represented at several museums, including the National Museum. 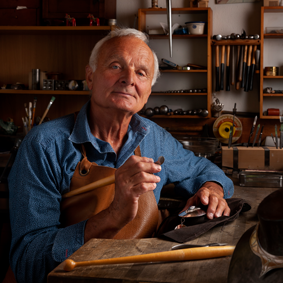